Beginning Running Over 50 – Can You Do It?

beginning running, over 50, starting to run

The Short Answer is Absolutely.

The long answer is, over 50 is as great a time as any to begin running.

You truly are. Examples of people beginning running later in life are so numerous now as to be commonplace.

My family doctor, now in his 80s, started running after raising a family and is still competing in races. Jeff Galloway, the well-known Olympian and running coach notes that he frequently coaches beginning runners in their 50s, 60s, 70s and even 80s. Galloway’s own father Elliot finally started running himself after age 50. Dr. George Sheehan started running late in life and went on to set age group records and become one of the world’s most famous and well-loved running authors and philosophers.

Jim Fixx, in his seminal “The Complete Book of Running” highlighted the running exploits of four people over 50: 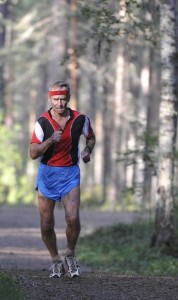 Fact is, yes, there undeniably, undisputedly, unabashedly is a running life beyond 50.

“The remarkable and wonderful thing about the world of running is that people like Lewis, Kelley, Bright and Perry are in no sense looked upon as intruders – or even curiosities. They run in the same races as twenty-year-olds and receive equal respect for their accomplishments…”

And this goes equally for women. (When Fixx’ book was written, in 1977, it was seven years yet before the first women’s Olympic Marathon.)

So, yes, and you’ll be in good company when you get started.

Is it all Downhill from Here?

Okay. So I have a question for you.

What age is over the hill?

Not until you hear some facts.

In a study done by Dennis Bramble at the University of Utah, and made famous in Chris McCullough’s “Born to Run”, a team looked at finishing times, by age, for both men and women in the 2004 New York Marathon.  They found that, starting at age 19, the runners got faster every year with speeds peaking at age 27.

But what do you think they found on the other side of the peak? How old were runners when they were back to running the same speed as the nineteen year olds? Clearly it wouldn’t be 35, that would be too easy. It turns out it’s not 35, or 45, or even 55. It’s 64 years old. On average, a 64 year old runner can compete on an even basis with someone 45 years her junior.

So, now, does your definition of over-the-hill require redefinition? Of course it does.

How To Get Started 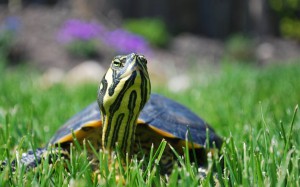 The biggest thing in running, for all runners no matter how long they’ve been running or what kinds of distances they do, is avoiding injury. To a beginner that might sound counter-intuitive for a sport that involves zero body contact, but it’s a reality. There’s a reason runner’s fairs (the events ahead of big races) and starting lines smell like Rub A-535. Generally, the reason is people not going slow enough. Thing is, it’s within our control.

Before You Start…Find a Good Beginning Program

You can find good beginning running programs at your local running store. Staff are usually more than happy to point you in the direction of either one of their own training programs, personal trainers, or some good books (which they probably have in stock).

My favourite training books are by Jeff Galloway. Easy to read and well laid out, his books have programs for all categories of runners. I’m at the beginning stages of one of his programs now.

His “5K and 10K Running” has tremendous programs for beginners – starting with walking. And his run-walk-run philosophy of training is tailored specifically to help you avoid injury.

Talk to Your Doctor

Very importantly, talk to your doctor to see if there’s anything she would want to have looked at first – or anything you might want to watch out for or monitor closely before you start on a running program. Nuff said.

Invest $100 in a pair of good running shoes. That’s about all you really need that you probably don’t already have. And don’t be tempted to pull out the pair you got in high school. The pair you called Sneakers. 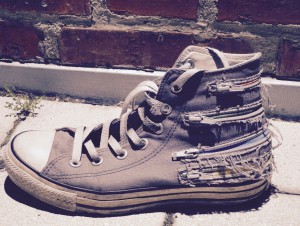 Or the pair your kids gave you two Christmases ago.

Go see the professionals at the running store. If you have a pair of worn in shoes from long ago, bring them along. They’ll fit you up with the right shoes for your style of gait and your size.

If you don’t have a watch you’re comfortable wearing, or you’d sooner not carry your cell phone, you might want to look into a decent running watch.

You’ve got the t-shirt and shorts.

Lace Up and Open the Door

The final step, and the first step, is that step out the door.

Think of all the benefits you’re about to give yourself – a healthier body, a clearer mind. And a feeling of, if not turning back the clock, working with it.

To quote once more from Jim Fixx:

“We are reasserting, as modern man seldom does, our kinship with ancient man… This, I think, is our remarkable secret, one we share every time we go running.” 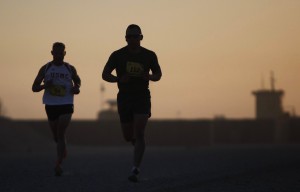