If you’re like me you might hang on to your running shoes well beyond their best-before date. Maybe they got you to a personal best, propelled you to an age-group top 50%, or maybe they’re just those old friends you can’t bear to part with. One way or the other you’ve still got ’em – unable to bring yourself to cart them out to the curb with the other trash.  Besides, you never know when you might need them again, right?

Well, before a significant other discovers the stash and turns them all over to the fire department for disposal, turn them over yourself and have a look at their soles. (The shoes, not the fire department’s.) What you’ll be looking at is your running shoes’ wear pattern. The way your outsoles have worn as you’ve racked up the mileage.

Being Your Own Running Shoe Mechanic

In the same way that tire wear might tell your mechanic something about your car (does it need alignment or wheel balancing or do your tires need inflating), your wear pattern might tell you a thing or two about how you run – and what’s been going on down there all those miles.

Here’s what the bottoms of one of my past-expiry-date shoes looks like. I’ve outlined the wear area in green in the photo to the right. 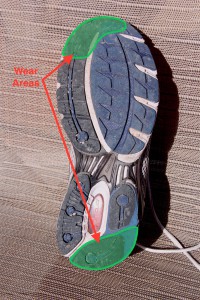 With a little deductive reasoning, we can reasonably conclude that over a large number of cycles in these shoes:

This is pretty much the way most of us wear them down. It’s called “normal” pronation (pronation being the rolling of the foot). In super slow motion, you’d see your foot strike at the heel and try to roll slightly inward and flatten out to absorb some of the landing forces before pushing off near the big toe.

Underpronation – Running on the Edge

Normal, however, isn’t normal for everybody. If your foot doesn’t roll as much, or at all, through the foot’s contact with the ground, the landing forces wind up on the outside (lateral) edges of your feet. This is called underpronation or supination. A supinator’s outsoles will wear along the lateral edge. I’ve used the same shoe to show you where you might expect to see wear if you supinate. 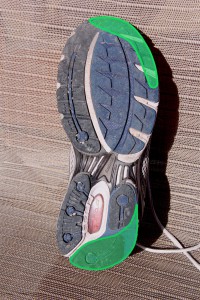 Maybe not “normal” but perfectly natural (in the event you’re inclined to worry).

Overpronation – Rolling With It

Some runners overpronate. Their foot rolls significantly toward the medial (inward) edge during foot strike, causing toe-off from the inside edge of the shoe. Overpronation tends to look like there’s a lot going on down there, lots of movement in the feet, when you’re running. Again, it may not be “normal”, but it’s perfectly natural for you. The result, though, is that a lot of the impact forces of foot strike are born on the inside edge of the outsoles. 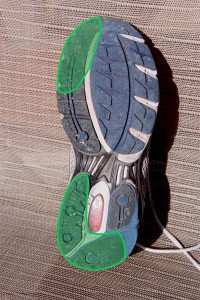 So What Can These Wear Patterns Tell Us?

Well, we can say that if your shoes are wearing with a “normal” pattern, and you haven’t been injured, you’re probably in good shoes for you.

If you’re finding wear along the outside edges of your shoes, it tends to indicate that you have a high arch and you might want to consider shoes with some arch support to even out the loading on your feet.

If it looks like you’re overpronating, you may want to look into what are called control shoes – shoes with plenty of cushioning and support.

Not the Whole Story

It’s generally the midsole – the cushioning part of your shoe, the stuff that does the work – that breaks down first. And it’s the sort of stuff you really can’t see.

Your outsoles, depending on their material, may not wear down a lot by the 300 – 500 mile mark that shoe manufacturers want you to trade in by. So you may not get much visible information at all by the time the warranty is up so to speak.

Also, the interaction between your shoe, your foot and the ground is complex. So is the way your ankle joint and knee react and adapt as your shoe wears. So what you see as a wear pattern on the bottom of your shoe may be the result of any number of things.

How Have You Been?

The wear pattern also doesn’t tell you about how you’ve been doing in between all those miles.

Have you been healthy? Injury free?

If so, keep on doing what you’re doing and get into the same sorts of shoes – or if you’re feeling nostalgic don’t retire the ones you’re using.

If you’ve been sidelined by injury, it’s time to head down to your running store with your shoes. Have a qualified professional there have a look at both your old shoes and your running gait and put you into a good pair for you.

Then let your significant other call the fire department to hand over your old worn out pals – preferably when you’re out of the house.

It could be emotional. 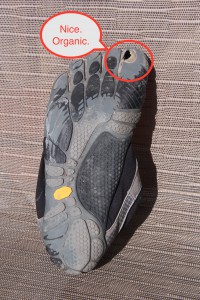